The project is on the right banks of the Dnieper river, the oldest part of the city, between two green areas of ecological and landscape interest: Pushkin Park and Kiev zoo. The building acts as the transition between the urban area and the large urban park through a large patio that opens up to the green area, integrating the Clinic and the park. The project involves the building of a new hospital to provide a unique, specialist service and to working with the existing clinic to provide a full complex of services. The two buildings will have their own specialist services and will work together to provide a unique, complete range of medical services. Both complement each other's range of services so as not to double up on areas, wherever possible

Adaptation to the environment // The capital city of Ukraine, where this project is located, is in the north of the country and spreads over both sides of the Dnieper river. This project is specifically located on the right bank of the river. Kiev is characterised by its large green regions and extensive plant life, in the area surrounding the plot is Pushkin park and the city zoo.

Organisation and layout // Two different volumes are designed for the clinic building, the first U-shaped on three floors containing the medical care units, and the second bar-shaped on another four floors, three of which form the hospital wards and the technical gallery on the top floor. The project also includes three basements where the support units are located. Two main circulation cores are designed on opposite walls – north and south – one for use by the general public and the other for restricted use, with lifts for the bedridden and the entry of supplies. Each one contains a stairway with natural lighting and two lifts.

Singularity and character // The layout of the building’s volumes creates an open patio onto Pushkin park. The two main façades of the upper floors, where the hospital wards are located, face east and west in search of favourable views of the park.

Sustainability criteria // The design process for the façades involved the energy study of the solutions. Seeking the greatest degree of energy efficiency when choosing the façade and carpentry solutions 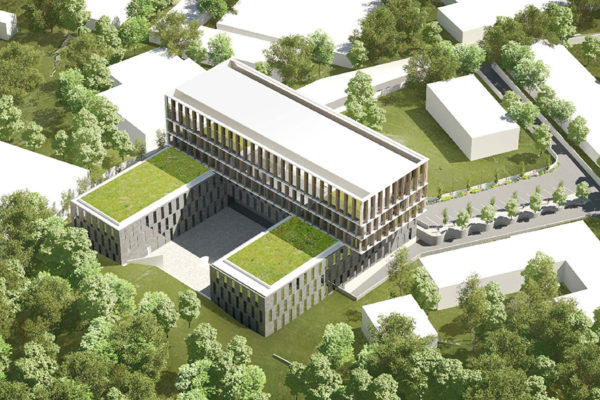 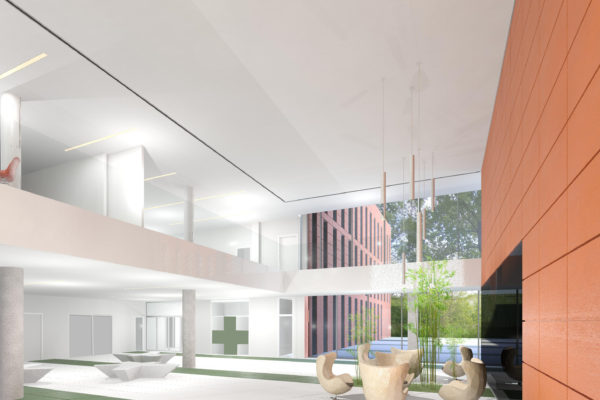